Neurons: An overview of the anatomy and function 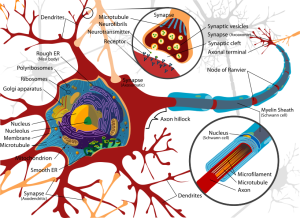 In humans and other animals, the nervous system controls and regulates many functions including, voluntary and involuntary movements, sensation, perception, cognition, emotion, memory, and internal bodily functions, such as maintaining homeostasis, and digestion, amongst others. Neuron (Figure 1) [1], a highly specialized cell, is the structural and functional unit of the nervous system. Neurons are electrically excitable, responding to stimuli by generating electrical signals, that they use as a means to convey information to neurons within the brain or other target cells in the body.[2] There are over a 100 types of nerve cells, with diverse morphologies and molecular expression patterns. It has recently been determined that there are 86 billion neurons and an equal number, 85 billion, non-neuronal, glial and endothelial cells in the human brain.[3][4]

The structure of the neuron[edit]

In the 1800s, Otto Friedrich Karl Deiters described for the first time that nerve cells are functionally polarized into three distinct parts – cell body, dendrites, and axons.[5] The cell body, also known as the soma, contains the nucleus and cytoplasm, and like other prototypical cells in the human body, the major organelles important for varied cellular functions are suspended in the cytosol, including the nucleus and nucleolus, endoplasmic reticulum, Golgi apparatus, mitochondria, ribosomes, lysosomes, endosomes, and peroxisomes (Figure 1).[1] The neuronal cell membrane has two main identifiable extensions, referred to as processes or neurites, and are classified as dendrites and axons.[6] The pre-synaptic terminals, important for neuronal signaling represent another distinct region located at the distal end of the axon. It was the 19th century Spanish Nobel laureate Santiago Ramón y Cajal’s detailed rendering and intricate drawings of neurons - utilizing the novel Golgi silver-staining method - that established the ‘dynamic polarization’ of neurons: the flow of electrical signals that carry the information in one direction, from dendrites or cell body, the receptive end, to axon terminals, the transmitting end.[7] Cajal is also credited with defining the neuron as an independent and separate signaling unit in the nervous system, that is contiguous and not continuous, in most part, with other neurons.[8]

The shorter neuronal processes, the dendrites, (Greek for tree whose branches they resemble) receive information in the form of electrochemical signals from other neurons. These signals predominantly involve a neurotransmitter released from the transmitting - pre-synaptic neuron, however, other signals like light, odorants, sound (pressure waves), touch (mechanical), also evoke an electrical response in the receiving - post-synaptic neuron. The dendrites are usually thin, unmyelinated, and highly branched processes.[9] Broadly speaking, the electrical signals travel through a neuron from the dendrites, across the cell body, and then down the axon shaft to terminals located at the synaptic cleft. After receiving signals, dendrites typically produce graded receptor potentials i.e., small, local changes in the electrical voltage of the membrane. The receptor potentials match the intensity and duration of the input stimulus, and are mostly excitatory depolarizations, and less frequently inhibitory hyperpolarizations.[10]

Neurons have a longer myelinated process called an axon that emerges from the cell body and projects to target cells that may lie 0.1 millimeter to over 1meter away! The axon can branch several times as axon collaterals that target nearby cells, but the longer main branch of the axon travels and connects with cells in different regions of the nervous system. An axon is typically cylindrical and maintains a constant radius of between 1 to 25 micrometers along its length. The speed of propagation of the electrical signal depends on the radius of the axon: In other words, the larger the diameter, the faster the propagation of the signal.[10]

The conical area where an axon attaches to its cell body is called the axon hillock. Based on inputs from several dendrites, an electrical signal in the form of an action potential is triggered at the initial segment of the axon and is the fundamental mechanism of signal conductance in the nervous system. Action potentials are propagated, without diminishment of their amplitude down the length of the axon to the axon terminals that end in synaptic boutons, where the electrical impulse is transformed into a chemical signal. The synapse is a narrow gap between the pre-synaptic terminal and the post-synaptic neuron. Chemical transmitter’s contained in small vesicles in the boutons are secreted into the synaptic cleft, and diffuse to bind a specific receptor protein on dendrites or soma of the receiving cell.[6] The post-synaptic cell converts or transduces this chemical signal into an electric one, repeating the process that continues, and relays the information to following post-synaptic neurons. This electrical to chemical to electrical signal transformation forms the basis of communication in the nervous system.[9]

Many axons have a protective, insulating sheath around them called a myelin sheath that is supplied by specialized glial cells. This sheath envelopes the axon in many concentric layers. The myelin ensheathes the axon at regular intervals termed internodes, whereas the unmyelinated nodes, called the nodes of Ranvier are interspersed between them and lie exposed to the extracellular fluid. (See figure 1). The myelin sheath is formed by oligodendrocytes in the central nervous system, that each contribute myelin to as many as 30 axons, in contrast to the Schwann cell in the peripheral nervous system that each provide myelin to a single segment of an individual axon.[9] Myelin is primarily made up of multiple layers of lipids and proteins and acts as an insulator that helps in the rapid conduction of signals. Due to the presence of myelin sheaths, the cross-section of the brain shows a distinct organization characterized by gray and white matter. The outer area of the cortex referred to as gray matter, is primarily composed of unmyelinated neuronal cells bodies and dendrites, whereas the inner white matter owing to the myelin, is predominantly axonal.[11] This organization is reversed in the spinal cord, contributing to the distinct ‘butterfly’ shape of the internal gray matter, surrounded by white matter. Based on their appearance, neurons can be classified as myelinated or unmyelinated. Myelinated neurons conduct signals faster than unmyelinated neurons. When the electrical activity in a myelinated neuron is measured, it appears to be dancing or jumping from one node of Ranvier to the other, where it boosts its electrical impulse. Termed saltatory conduction, this regenerative capacity of the action potential contributes to faster conduction of signals, traveling at speeds as high as 100m/s.[9][11]

Neurons are classified depending on their anatomy or their function. The differences in the cell morphologies reinforces the functional differences in distinct brain and spinal cord regions, as each of these neuron types is exquisitely specialized to receive and transmit signals adapted to a specific modality.

Based on their morphology, neurons can be categorized into three main types in vertebrates:

Multipolar: These neurons have multiple processes and reside primarily in the central nervous system. A single axon that can vary in length, and dendrites that vary in their intricacy and extent of branching emerge from cell body. Dendrites branch from various parts of the cell body including the apical and basal aspects. The dendritic branches are subject to modification based on synaptic input, and this contributes significantly to neuronal plasticity. These multipolar cells can be distinguished by the shape of their cell body and branching patterns of their dendrites into Pyramidal, Purkinje, Stellate, Fusiform, Glomerular, and Anaxonic granule or amacrine neurons. Multipolar Golgi Type I neurons possess long axons that project great distances, in contrast, Golgi Type II neurons have short axons and subserve local connections, and are typically interneurons.

Bipolar: These sensory neurons have one dendrite and one axon that emerge from opposite ends of the oval soma. Typically, these neurons innervate sensory organs such as the retina, olfactory epithelium, and the cochlea in the auditory system.[9][10] Bipolar cells possess short axons and limited dendritic branching, essential for their role in precise, high-resolution encoding of incoming sensory information.

Pseudounipolar: These are sensory neurons, and usually have an oval cell body with a short axon that bifurcates into a single continuous axon, with peripheral and central terminals at opposite ends. The cell body is located in the dorsal root ganglion and sensory ganglia of cranial nerves, and mesencephalic nuclei. The peripheral branch in the peripheral nervous system, conveys signals from sensory receptors in skin, muscle, joints, internal organs, whereas the central process of the neuron transmits signals principally to the spinal cord in the central nervous system.

Sensory neurons are afferent neurons that transmit sensory/enviornmental signals from the periphery to the central nervous system, resulting in perception. Stimuli are external somatic, or internal visceral sensations that are carried by these neurons centrally. Bipolar sensory neurons are activated by physical and chemical stimuli in the form of touch, pressure, temperature, light, sound, and taste.

Motor neurons are multipolar, efferent cells carrying commands from the central nervous system to the peripheral muscles or glands. Upper motor neurons in the cortex convey information about muscle movements to lower motor neurons in the brainstem and spinal cord. Motor neurons, referred to by the 19th century British Nobel laureate, Sir Charles Sherrington, as the “final common pathway”, represent the singular, indispensable pathway for central nervous system signals to control the initiation and execution of movement. These neurons have the longest axons in the human body extending up to a meter. Somatic efferents innervate the skeletal muscles and visceral efferents the smooth muscles of internal organs.

Interneurons are predominantly multipolar neurons that stay within the central nervous system and integrate signals.[6] As the name implies, they are critical components of interconnectivity between neurons and different areas of the nervous system. Long relay interneurons, project between brain regions, whereas shorter local interneurons are involved in local neuronal circuits. Interneurons play an important role in the spinal cord motor reflexes as an intermediary between sensory and motor neurons.

The dysfunction in the nervous system could be due to pathologies such as neurodegeneration, acute axonal damage, or demyelination that affect neurons. Infection, trauma, and genetics may lead to neuronal dysfunction.[6]

Multiple sclerosis (MS) is one such widely studied auto-immune disease which targets brain and spinal cord neurons and myelin, leaving the nerve fibers unable to conduct signals efficiently and disrupting communication within the central nervous system and with the periphery. Histological studies have revealed demyelination of axons, axonal damage, and inflammation. Multiple sclerosis can manifest as: clinically isolated syndrome, relapsing remitting, secondary progressive, and primary progressive courses of the disease.[12] The symptoms of multiple sclerosis include sensory and motor symptoms such as vision problems or double vision, paresthesia, problems in maintaining balance and coordination, fatigue, pain in neck or back muscles, and sexual dysfunction.[10] Other challenges involve emotional symptoms including anxiety and mood swings; cognitive dysfunction such as deficits in memory and attention; and clinical depression.[12]

Another progressive disease that affects the nervous system is amyotrophic lateral sclerosis (ALS), where both upper and lower motor neurons of the brain and spinal cord, respectively, are affected. Loss of these neurons results in the atrophy of muscles they innervate, and the diminishing voluntary control of muscles is ultimately fatal, with the majority of ALS patients succumbing to respiratory failure. Involuntary muscles are largely spared, those that control internal organs such as the gastrointestinal tract, heart, bowel, bladder and sexual function, and so too are the senses of vision, hearing, smell, taste, and touch.[13] In this disease, the axons undergo progressive degeneration slowly over a longer period of time and ultimately neurons die leading to motor symptoms.[6][10] The disease progresses rapidly with decline in the ability to initiate and control muscles, accompanied by the debilitating symptoms of weakness, including loss of ability to walk, chew, breathe, speak. Depending on the type and extent of motor neurons affected, ALS is classified as: Classical ALS, Progressive bulbar palsy, Progressive muscular atrophy, and Primary lateral sclerosis. This disease is also known as Lou Gehrig’s disease, for the famous baseball player who contracted ALS.[14]

Retrieved from "https://brainmatrix.com/w/index.php?title=Neurons:_An_overview_of_the_anatomy_and_function&oldid=1988"
Hidden category:
This page was last edited on 27 October 2022, at 13:07.
Privacy policy
About brainmatrix
Disclaimers