Notes of relevance for functional medicine[edit] 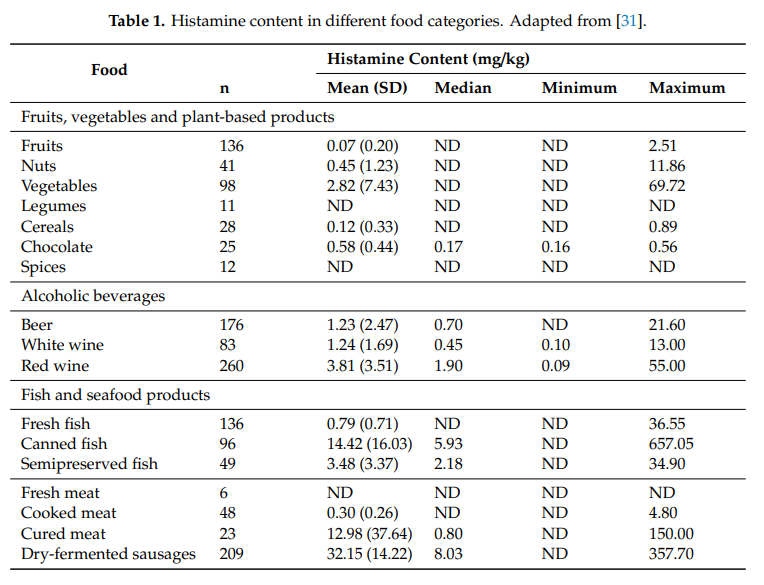 Mental fatigue. Histamine has been implicated in cognitive test performance following acute exercise. For instance, research into the relationship suggests that the binding of histamine to H1 receptors may contribute to reductions in mental fatigue that accompany exercise.17

Eating behavior. Histamine is linked to appetite and body weight, which was recognized when first generation antipsychotics and antidepressants that antagonized H1 receptors stimulated appetite and led to weight gain.8 Subsequent research revealed that these effects occur due to the modulatory effect of histamine on leptin. Several studies also suggest that food intake decreases in response to histamine due to its actions on H1 receptors in the ventromedial hypothalamus or paraventricular nucleus.18

Motivation. Brain histamine appears to contribute to exploratory behavior and motivation, particularly as they relate to appetitive and consummatory behaviors, which may help explain why histamine is implicated in nutrition and eating disorders.8,9,14,19

Apathy. In accordance with the role of histamine in motivation, apathy can occur in response to histamine dysfunction.19 Avoidance responses have been shown preclinically to be reduced through H1 activity.13

Compulsivity disorders. Lowered levels of histamine are associated with disorders that involve compulsivity such as obsessive-compulsive disorder (OCD) and Tourette’s syndrome.11 Animal studies that have investigated the effects of histamine depletion suggest that histamine may be involved in tic-phenomenology.14

Substance abuse. There is evidence that histamine may play a role in the consumption of alcohol and other substances of abuse, as well as in other potentially addictive behaviors.8,9,13,16

Sleep. Histamine in the brain promotes wakefulness.8,16,19 The initial recognition of this link occurred when first generation antihistamines led to unwanted side effects of sedation.8 While antihistamines have been shown to increase daytime sleepiness, they have also been shown to improve nocturnal sleep quality.20 At the same time, changes in the neurotransmission of histamine have also been observed in people with sleep disorders.8,9

Based on these observations, antihistamines have begun to be used to treat insomnia.21 Research has shown that over-the-counter antihistamines may provide effective short-term treatment for insomnia in young adults but that these patients develop a tolerance quickly.22 Histamine receptor antagonists have also been shown to improve sleep maintenance.23

Immunity. Histamine plays a role in immunity across several clinical contexts and has been shown to mediate certain autoimmune conditions.24

Histamine is a critical modulator of inflammation in the brain as well as the rest of the body.11,24 With respect to skin conditions, the swelling that occurs in response to histamine likely contributes to allergic dermatitis.29

Obesity. In addition to its effects on appetite, histamine can lead to weight gain and obesity through its influence on metabolism.8 Specifically, histamine increases lipolysis, which there is some evidence to suggest may be mitigated through blockade of H3 receptors.

Nausea and vomiting. Stimulation of H1 receptors in the brainstem induces vomiting, as do intracerebroventricular injections.31–34 Antihistamines may be indicated for nausea and vomiting, especially in cases of motion sickness and vertigo.21

Vertigo. Antihistamines are the largest class of agents that are used to treat the symptoms of vestibular vertigo.35 Recent research suggests that antihistamines that antagonize the H4 receptor appear to hold promise for treating peripheral vertigo.35

27. Studies of the mechanism of acute vascular reactions to injury. I. The relationship of mast cells and histamine to the production of edema by ovomucoid in rats. | Semantic Scholar. Accessed July 10, 2022. https://www.semanticscholar.org/paper/Studies-of-the-mechanism-of-acute-vascular-to-I.-of-Benditt-Bader/43178e634f9c35e04235302e3443aa10689a0d48